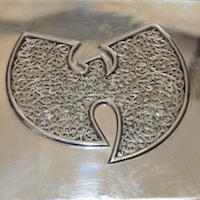 Once Upon A Time In Shaolin (Wu-Tan Clan)

Wu-Tang spent six years recording the 31-track double album, which was packaged in a handmade silver and nickel case. At the time it was produced, band member RZA stated he wanted the release to be viewed as a piece of contemporary art.

The one-of-a-kind album was originally bought by convicted ‘pharma-bro’ Martin Shkreli in 2015. It was revealed last year that the album had been sold by the US government to the crypto group PleasrDAO for $4 million.

Now, following a FOIA request granted to Buzzfeed News and Motherboard, further details about the sale along with a selection of 54 images have been shared.

The images are available to see here, and show the album sitting in “cedar wood box covered in black cow leather with light beige velvet lining”. The album itself is contained on two CD’s inside a silver box, with a 175-page leather-bound lyric book and a gold-leafed certificate of authenticity also included.

Some elements of the images, including tracklists and parts of the lyric book have been covered up due to what the government has cited as “trade secrets”. The documents reveal that the album’s current owners are permitted to display the presentation box the album is held in, but are forbidden from making digital copies of the release. This indicates that it may still be some time before the public gets to hear ‘Once Upon A Time In Shaolin’.

In October last year, RZA admitted that he regretted selling the album to Martin Shkreli in the first place, indicating that the group did so before “it was revealed of his character, of his personality, and all of the insidious things he would go on to do».

In November, Wu-Tang Clan’s Ghostface Killah and Raekwon dropped a new track, ‘Bob James Freestyle’. That same month, RZA announced his first foray into comic books with ‘Bobby Digital and The Pit of Snakes’, which will be published in May 2022 by Z2 Comics.