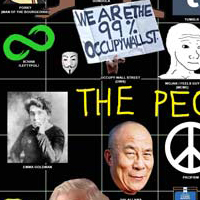 The map Online Culture Wars is an overlay of hundreds of politicized memes, along with influential political figures and symbols. It is designed as a discussion starter, intended to visualize and contextualize the ongoing online culture wars, and some of the main political references, actors, and influencers.
From Twitter to Facebook, Instagram, Reddit, Gab, or 4chan, one of the by-products of online culture wars is the over-politicization of seemingly mundane topics, products, practices, and cultural elements. In recent years, online cultures have been subjected to a growing polarization, politicization, and radicalization, influenced by numerous actors, and magnified by the very features of ubiquitous social networks. This cartography offers a representation of online ideological and political frictions, integrated into the visual system of a Political Compass meme.