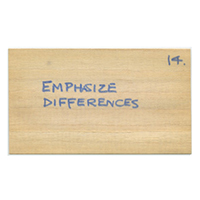 Unlike the Fluxus scores that Eno had used years earlier, which were essentially directives for performance, the Oblique Strategies cards were idea-generating tools and tactics designed to break routine thinking patterns. While born of a studio context, Oblique Strategies translated equally well to the music studio. For Eno, the instructions provided an antidote in high-pressure situations in which impulse might lead one to default quickly to a proven solution rather than continue to explore untested possibilities: “Oblique Strategies evolved from me being in a number of working situations when the panic of the situation—particularly in studios—tended to make me quickly forget that there were other ways of working and that there were tangential ways of attacking problems that were in many senses more interesting than the direct head-on approach.”

In fact, while producing David Bowie’s album Heroes (1977), Eno and Bowie used Oblique Strategies on the song “Sense of Doubt.” They each picked a card but didn’t reveal its content. “It was like a game,” Eno recalled. “We took turns working on it; he’d do one overdub and I’d do the next. . . . As it turned out they were entirely opposed to one another. Effeciively mine said, ‘Try to make everything as similar as possible,’ and his said ‘Emphasize differences.’”